Most furries are geeks, and a lot of the people who attend EMF are geeks too, so there's a big overlap with the communities. The Furry High Commission exists to provide a focal point and consular services for furries attending EMF. We know you're here, so come say hi! Anyone is welcome, be they furries, or curious about the furry fandom.

We will be operating an amateur radio station using our club call sign, M0YIP. We'll also have an SDR project and some other bits and bobs with us, as well as fursuits and a sunny disposition. The pagers and an FM repeater (GB3MF) are operated from the village. More info on those later.

This is a non-exhaustive list of village inhabitants. If you want to add yourself, your name can be whatever you prefer to be called by. If you're bringing something cool like a radio or something communally useful like a kettle stick it in the "Bringing" Column. We don't need to know about your socks. If you are sleeping in the village, identify which tent you plan to sleep in. If you are sleeping elsewhere, just put "Elsewhere".

This is the initial plan for laying out the village. The intent is to cluster under one end of the dipole antenna. In 2018, some other attendees chose to camp under the dipole and it's likely that will happen again, so if we are able to leave space for that to happen safely, that would be good.

The HF dipole antenna is orientated to give us the best chance of working stations in North America. 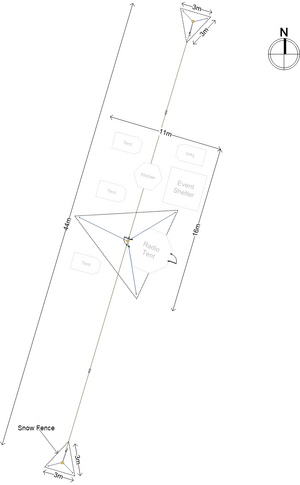 The main mast is a Clark QT-12T. It is a telescopic, pneumatically extended aluminium mast, 12m tall and with a maximum head load of 15kg. It is safe to use in winds of up to 120km/h with guy ropes. Third-party liability insurance for this structure is provided by Arch Insurance, policy reference RS335821057.

Using the Ofcom EMF compliance distance calculator, the minimum separation to be maintained between the radiating feed point of the dipole and the public is 4.77m, based on 100W into a 2.15dBi dipole. The achieved separation is 10m, based on the feed point being 10m AGL and nobody being taller than 2m. 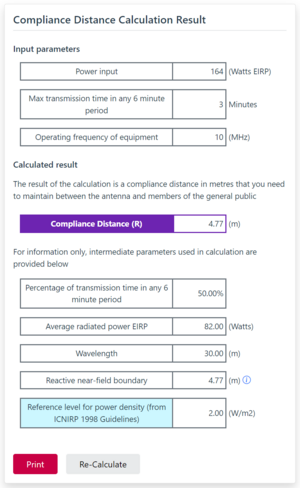 There is a shock hazard associated with the ends of the dipole, so 3m lengths of CLS are used at each end of the antenna to keep it safely above head height.